Invitation to our higher education partners 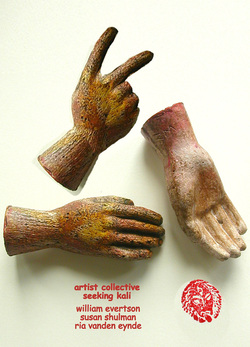 Collaboration and process is at the heart of the Seeking Kali Artist Collective. The Medusa Gaze is based on the direct experience of a member of our artist collective who was accosted in a public space by a man making lewd and crass comments. Does this unwanted bullying in the public sphere sound familiar?  Of course it does because it is part of the public landscape from universities to cities, from every country around the globe.

As artists we are concerned with the translation of our experiences into a form that causes a viewer to pause and contemplate it's expression. In this case it we came upon an idea to take a common but profound problem women worldwide encounter and not only shed light on it but make an empowering visual statement.

Think about this; do you know any woman who has not been subject to that behavior? Acceptance of the behavior, dismissal of it's impact or blaming of the victim appears to be the default reaction across cultural landscapes.

The idea for the Medusa Gaze piece came to mind almost without thinking. Within hours we were off and running with the idea of making a very simple yet visually striking piece consisting of large scale projected images of strong women simply ‘present’ in public space. In effect to assert command of a public space by a change in scale. To accomplish this we set up opportunities for women to contribute several seconds of video in a pose of strength and solidarity. The  suggestion for our piece consisted of a simple standing pose, arms crossed, looking directly at the camera.

Taking a negative experience and building a positive message about shared perceptions of public space is the challenge we have set out for the piece. We were working from a context of crowd-sourced raw material to construct the Medusa Gaze as our own perception of the complex nature of this work was beginning to grow. As an artists working with the raw materials of people’s willingness to participate, we found we were in new and difficult territory. We also were confronted with another aspect of the nature of this particular artwork. A women’s perception of safety in public space is fluid and to a large extent dependent on the willingness of bystanders or observers to either ignore harassment or to offer aid to a victim. This seems to dovetail with the fact that gathering submissions proved to be more difficult than we originally thought given the widespread occurrence of street harassment.

What has come to light, is the realization that Street Harassment is truly a silent suffering. Even in an artistic context there is still the fear of standing up. We're attempting to create an artistic vehicle for sharing and empowering, and think that those who stand up could be the models for those who can't, who are equally deeply affected, disheartened and united by fear, but frozen in silence.

Our challenge to those in university settings is to take the idea of positive projection of ownership of public space as a source for individual or group projects building upon our simple premise or devise an entirely new creative expression of renewed empowerment in public.

NY Montclair State University students tackled broad issues of harassment in two courses: Persuasive Campaigns & Documentary Filmmaking, 2012. The inspiration came from the Medusa Gaze Project. Their work is documented on  msuprojects4change.tumblr.com
~May 2012, questions and concerns may be directed to seekingkali@yahoo.com